Supermarkets are major contributors to global warming through emissions of refrigerants, which are super potent greenhouse gases.

Drawdown Toronto and BC Drawdown are joining forces with EIA and their Climate Friendly Supermarkets initiative to investigate which refrigerants are in use across Canada.

Be a citizen scientist and help us collect data! Find out which refrigerant gases your local grocery store is using, and put it on the map. It’s easy — just take a picture when you shop!

Preventing refrigerant pollution is one of the single most effective actions we can take against global warming. Analysis by Project Drawdown has shown that preventing leaks or replacing these super pollutants can eliminate more than 100 billion tonnes of CO2-equivalent emissions by 2050.

Refrigerants are gases we use to keep things cool. They are inside fridges, freezers and A/C units, and most are incredibly harmful global warming gases if released into the atmosphere — thousands of times more potent than CO2. The main type of refrigerant today, hydrofluorocarbons (HFCs), is the fastest growing source of greenhouse gases. Preventing refrigerant pollution by controlling leaks and switching to more climate friendly alternatives is one of the top solutions to global warming!

Project Drawdown is the World’s Leading Resource for Climate Solutions. Its mission is to help the world reach “Drawdown”— the point in the future when levels of greenhouse gases in the atmosphere stop climbing and start to steadily decline, thereby stopping catastrophic climate change — as quickly, safely, and equitably as possible.

Climate Friendly Supermarkets is an initiative by the Environmental Investigation Agency (EIA) to map the use of refrigerants by supermarkets world-wide. We are collaborating with EIA to populate it with Canadian grocery stores. Can you find yours?

Add your supermarket to the map!

We held an online seminar on July 26 to explore refrigerant pollution and solutions with experts from the Environmental Investigative Agency. Watch the video to learn about what we are doing to tackle this problem and how you can help. 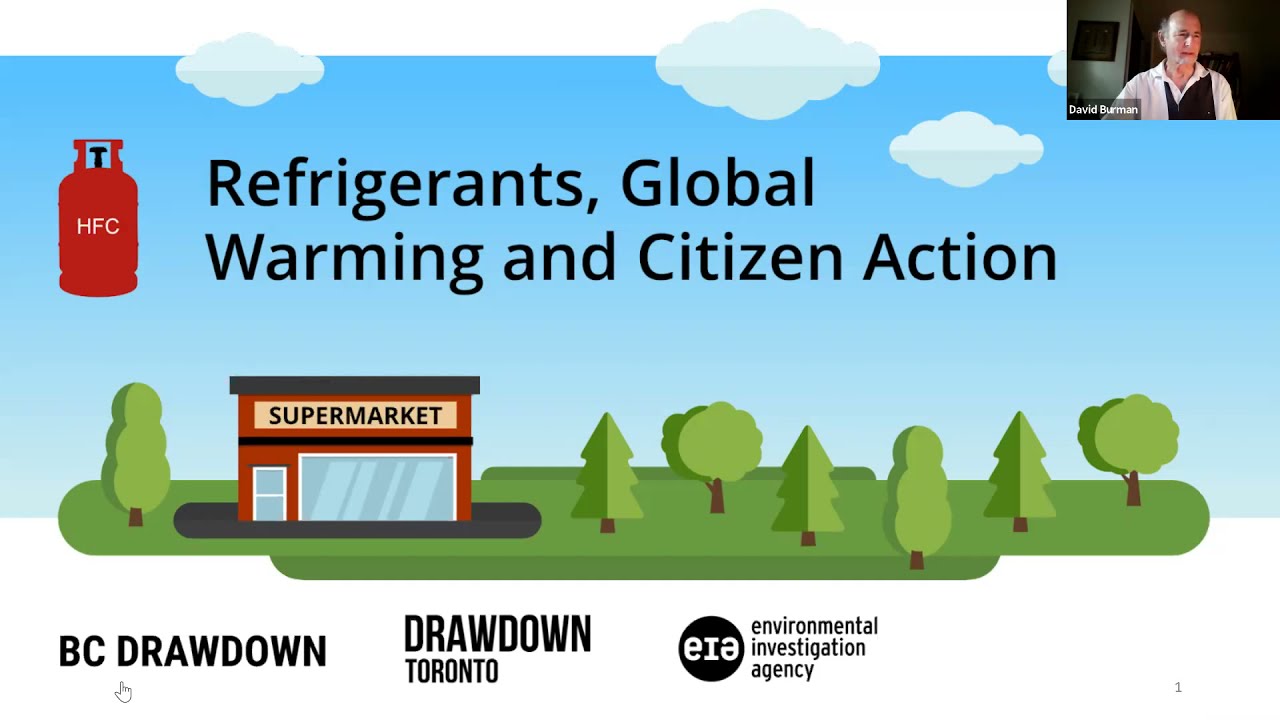 Refrigerants are gases that are used everywhere: in every fridge, freezer, A/C unit and cooler; in homes, supermarkets, office buildings, warehouses, factories, cars and many other places. Cooling systems often leak. When refrigerants escape, they end up in the atmosphere where they are extremely potent greenhouse gases.

There are many refrigerants in use today, each with its own Global Warming Potential (GWP). This measure was developed to allow comparisons of the global warming impact of different gases. Specifically, it is a measure of how much solar energy the emissions of 1 tonne of a gas will absorb over a given period of time, relative to the emissions of 1 tonne of CO2. For example, the GWP for the R-22 refrigerant is 1,810–it is eighteen hundred times more powerful than CO2!

The most common refrigerants used today are hydrofluorocarbons (HFCs), with a GWPs thousands of times higher than CO2. HFCs were introduced to replace other refrigerants (CFCs and HCFCs) that cause ozone depletion. CFCs and HCFCs have been largely phased out through the Montreal Protocol, and international agreement from 1987, but now HFCs are the fastest growing greenhouse gases in the world.

On average, it is estimated that 25% of refrigerants leak from supermarket systems each year, and often at a level that will not trigger an alarm for inspection and repair. EIA estimates that a typical American supermarket releases 875 pounds of HFCs each year, or almost 400 kilograms. Translated to CO2, that’s equivalent to the emissions of more than 300 cars!

If we take the total number of US supermarkets into account, the amount of entirely preventable emissions become astronomical: 15 million tonnes of HFCs. To continue the previous analogy, that compares to the emissions of 12 million cars. There is no reason to believe Canada is performing better.

The solutions: Preventing leaks and switching to climate friendly alternatives

Supermarkets can be part of the solution, not the problem! Project Drawdown has considered two of the most significant solutions to refrigerant pollution:

Altogether, these two solutions can prevent emissions equivalent to more than 100 billion tonnes of CO2 in the next 30-40 years–one tenth of all the emission reductions that are required to reach drawdown. That’s how big this problem is. Additional actions that have not (yet) been included in the analysis include using more effective appliances that need less refrigerant liquid.

Using alternative refrigerants is not hard. In Europe, more than 26,000 supermarkets have already made the switch to CO2 systems.

Canada has signed on the Kigali Amendment to the Montreal Protocol, another international agreement, which provides a framework to phase out the import and use of HFCs. Canada has developed regulations to require the phasing out of the highest GWP refrigerants in Canada, and many big users of refrigerants are retrofitting their systems to adopt lower GWP refrigerants. However, the phase out process doesn’t require large refrigerant users to jump straight to adopting ‘natural’ refrigerants, and in the meantime the refrigerants they are using are making their way into our atmosphere.

Find out more about refrigerants and the solutions to refrigerant pollution from:

Partnership with BC Drawdown and EIA

We are thankful to be working with BC Drawdown in this initiative to take action on refrigerant pollution and global warming!

This collaboration began with two engineers, Eleanor Gill and Matthew Walton, who became interested in refrigerants when it was identified as one of the top climate solutions by Project Drawdown.

As concerned citizens from Vancouver, they researched refrigerant use in Canada, looking specifically for actions that individuals could take to move the dial and affect positive change.

They aligned with the simple citizen action of EIA’s Climate Friendly Supermarket Project, and reached out east looking for support from other regions to help populate the map in Canada – and we are happy to be partnering!

In our continuing conversations we see great potential in further exploring this topic. Refrigerants are interwoven into our daily lives, through air conditioning of our living spaces, preservation of food from farm to table, and even in recreational hubs like ice rinks.

Together, we are taking a first step through this supermarket initiative, while looking towards further opportunities and next steps that lie within this solution to push industry and policy at all levels.

Why Focus on Supermarkets?

Transitioning supermarkets to climate-friendly natural refrigerants is one of the single most effective ways to eliminate emissions from HFCs.

There is currently little reporting on refrigerant use, leaks, and plans for retrofits to adopt climate friendly refrigerants. Supermarkets don’t often publicly share what refrigerants are in their stores, but it’s pretty easy to find out by looking at the labels in refrigeration and freezer units.

The action is simple — gather the data to map what refrigerants are in use at our local supermarkets and EIA will interpret and share how they each rank in terms of climate impact. By raising awareness and shining a spotlight on this issue through citizen data collection about refrigerant use, we hope we can encourage supermarkets in Canada to adopt more transparent and proactive practices around refrigerant management.

Supporting the supermarket industry to be more accountable and environmentally responsible starts with data and awareness.

Questions? Comments? Want to help? Get in touch!